After a very enjoyable tour of Skye with Highland Rider in 2004, I decided to go on their Hebrides tour in 2005. The choice of the Hebrides tour was for a number of reasons. I think any of the tours would be good. The tour I decided upon was for the end of May/ beginning of June; this suited me.

I found Peter and Fiona on their Highland Rider stand at the (2004) Motorcycle Show at the NEC. Les, (whom I'd met in my Skye tour last year) was also there, he was helping them entertain their visitors. 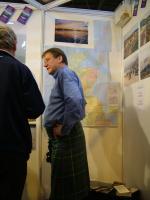 The stand was busy, but Peter wasn't going to let a chance of a booking escape. He sat me down, and proferred me a can of drink, I was trapped until he could take my booking!
Top

After the discussions I'd had last year over routes from the south to Scotland, I decided on going up the M1, M18, A1, A68 to Edinburgh. This worked well, and was an improvement (enjoyment-wise) over the M6 route I took last year. The only thing worth noting is that I went up on a Bank Holiday Saturday. The traffic was quite heavy, and at the Scotch Corner Services the car park was heaving. I didn't stop other than to get petrol (there was a toilet by the pumps which was useful), and merely parked the bike at the side and had a drink of water and a snack that I'd brought with me.

When I arrived at Peter's, no-one was in, but he'd left a note saying he would be back shortly. I decided to go and fill the bike with petrol instead of just kicking my heels, and passed Peter at the end of his lane as he was returning. I was already committed to going onto the road, so I went and got the petrol, and on my return found Peter mowing his lawn. As he said, he's away so much that he has to fit his domestic duties in as and when he can. He made some tea, and over the next hour or so, others arrived, including two men with their wives who were sisters with two bikes; also Steve, an (ex motorcycle) policeman; a husband and wife on separate bikes; and an American who had been on Peter's previous tour and would stay with us when we went to Oban where he would leave us to do his own thing for a couple of days before returning to the States.

The hotel we stayed at that night was five miles or so from Peter's, but was nicer than the one we used last year. Apparently Peter prefers this one because, at weekends, the local one can get quite rowdy. Peter likes his customers to get a good night's sleep. Suits me. 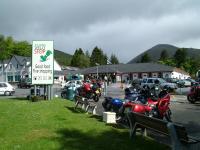 Next day, Peter and Steve (who had stayed overnight with Peter) picked us up at the hotel for our first day's leg to Oban. A nice surprise for me was that Richard and Jacky, who were on my Skye trip last year, joined us as we were stopped at the Green Welly. 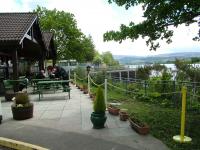 We stopped en route at the Cruachan underground power station, where we transferred from our bikes to a bus that took us a kilometre or so under the mountain to the huge cavern with its four hydro-electric turbines. We were told how it was used to rapidly put power onto the grid (classically when Coronation Street finishes and everyone puts on the kettle), and when there is spare capacity on the grid, the turbines are used as pumps to pump water back up to the upper reservoir. We stopped there for lunch.
Top

We caught the ferry from Oban to the island of Barra. Peter arranged for us to visit the ferry's bridge (you couldn't do this normally, one of the advantages of Peter's tours). 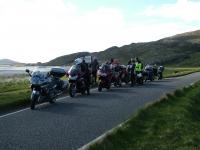 During the next few days we rode over excellent (for motorcycling) roads, caught ferries and crossed causeways, as we travelled up the Hebrides through Eriskay, South Uist, North Uist, Harris and Lewis. Peter stopped at several places of interest (how many airports have their runway on a beach?), and explained many local features (including peat cutting and drying).
Top 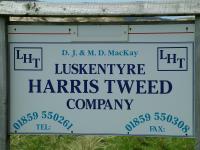 Of particular interest to me (as a surrogate for my better half) was a visit to a Harris weaver. This was a one-man operation, who had received an order from Nike for 3 million pounds Stirling (for tweed to make trainers!). He was having to find old weavers to re-open their operations to meet this order. I bought some (very expensive) tweed to take home for my dearly beloved. 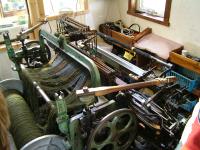 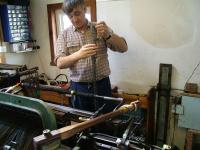 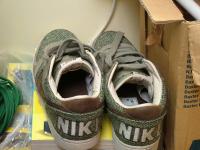 During all our time on the Hebrides the weather was just about perfect for us, mostly sunshine (we all got tanned on the ferries), but not too hot. Indeed, on the ferries, it was often very cold, even in the sunshine.

Back to the Mainland

We returned to the mainland from Stornaway to Ullapool, again with a visit to the ferry bridge. We rode through pouring rain through what should have been magnificent scenery, passing down the west coast of Wester Ross, stopping in Gairloch, Peter's home town, where we met his mother and twin brother; both remembered me from last year. As previously, very good company.

After leaving Gairloch we went down the side of Loch Maree, past Upper Loch Torridon. Then a tiny, winding, up-hill road (Pass of the Cattle); we nearly didn't do it because the weather had closed in and the cloud base was barely above us.

Back down to the main(?) road, then round Loch Carron, past Loch Duich, Loch Cluanie, Loch Garry, Loch Lochy, to Fort William, down to Corran, and across a small ferry to Ardgour, where we spent the night.

Next day it was up the north side of Loch Linnhe, round Loch Eil, and back to Fort William. (If all these lochs sounds like a boat ride, with the weather pouring with rain most of this time it sometimes felt like a boat ride!) We continued on, through Glen Orchy, Glen Lochy, then retraced our tracks through Callander, past Stirling and returned to LinLithgow.

Overall impressions? The motorcycling suited me very well, Peter's pace and choice of roads perfect. The weather was really bad for two days, which meant that views were not as good as they might have been, and most of us proved our waterproofs weren't fully waterproof!

The real dampener as far as I was concerned was not the rain. It was one of the riders, who, although claiming forty years of motorcycling, couldn't control his bike properly. Coming to rest he used his front brake aggressively, once dropping his bike on a garage forecourt (yes, it was on a slope and was greasy, but no-one else had a problem), and once on a gravel car park he pulled up beside another bike, and promptly fell onto them; Richard and Jackie, the unfortunate props, had to hold both bikes up until the rest of us could pull him up. Gravel (his nickname now) also was inconsiderate in his riding, for instance, whenever we had to stop in a passing place, he would not draw up to the bike in front, so restricting the space for others behind. He once, exiting a car park, pushed in front of me, so that I had to take significant avoiding action. I don't know whether it was deliberately wanting to be in front, or just ignorance.

Enough of that, I enjoyed the trip immensely. Everyone (with the one exception) came into that category I have for "good company" - really friendly, no pressure to conform to any particular behaviour pattern, could take a joke, and enjoyed the ride. A special mention of Richard, who I gather commented that he liked being behind me because in my riding I "always left a bit in hand". I think that was a compliment (or perhaps he was suggesting I was a wimp, but I think the former since Richard is a very laid-back type of person).

I decided on a different route home (that makes four differing routes between home and Linlithgow counting coming and going). I picked up the A7 south of Edinborough, and followed it all the way to Carlisle and the M6. The A7 gave me a good ride, never boring, not too much traffic, and comfortable overtaking places. It added perhaps twenty miles to the journey, but well worth it (I did do this trip to ride, after all).

So, I hope to go on another trip with Peter next year. Richard and Jackie suggested they would be trying for an Orkneys or Shetlands trip about the same time next year, and that they'd like me to be there! We shall see.